skip to main | skip to sidebar

Dr. Boyce Watkins
www.BoyceWatkins.com
Hey peeps!
The response I received from you guys on the new CNN show, “DL Hughley Breaks the News” was overwhelming. Within 20 minutes of sending out the email statement, we had an entire inbox full of messages expressing extreme disappointment in CNN and this offensive new show. This helped me realize that we need to do something about it.
Our goal is to present an intelligent, dignified and firm response to CNN, letting them know that programming based on racial stereotypes is not acceptable. Political satire can be quite funny, but it must be intelligent, balanced and conscientious. This is not the brand of humor presented in “DL Hughley Breaks the News”, which went back to the same degrading media stereotypes and disturbing images that scholars and consumers have been upset about for decades. Senator Obama opened the door for us to see ourselves as educated, enlightened and empowered, so the last thing we need is to be readmitted to the asylum of pimps, thugs, criminals and buffoons.
A sample letter you can use to contact CNN is presented below. You can get the contact information at this link. You can also forward this link and email to anyone you believe to share your sentiments regarding how our community should respond to this painful and disappointing new show. If you wish to hear my personal comments on the topic, please click here.
Finally, don’t forget that we are going to “Get our paper straight in 2008”, so if you wish to join our group for Dr. Boyce Financial Advice, please click here.
The sample letter is below. You can get contact information for key decision-makers at CNN by clicking here. Remember: Change won’t start with Obama or McCain. Meaningful change is going to start with US.
To CNN and its key decision-makers,
As a member of the Your Black World coalition, I am writing to inform you that I found your recently released show, “DL Hughley Breaks the News” to be a tremendous disappointment. While I certainly respect CNN’s effort to develop itself as “The most trusted name in news”, I did not find the new DL Hughley show to be consistent with the degree of trust that CNN has worked to obtain with the American public.
The 2008 Presidential campaign represents an amazing landmark for change within our country by allowing an African American male to present himself to the world as a dignified and educated member of our society, an image which lies in stark contrast to media representations confining Black men to being criminals, rappers, athletes and entertainers. I found it disheartening that this progress was reversed by CNN’s decision to create a show which relied on the very same stereotypes to build a consistent stream of laughs at the expense of African Americans everywhere. The show was also degrading to those in the broader community who support the candidacy of Senator Barack Obama, and who wish to see our great country move past the deep and painful wounds created by our nation’s legacy of racial inequality.
We ask that you discontinue the show, “DL Hughley Breaks the News”, and consider a brand of political humor that is respectful to all ethnicities and shows greater appreciation for the tremendous gains made in the 2008 Presidential election. Perhaps then, CNN can regain its status as “The most trusted name in news”.
Sincerely,
The Your Black World Coalition
Posted by TheAssistant at 10:54 PM No comments: 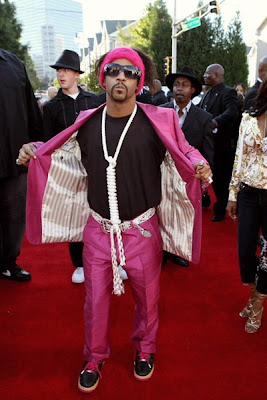 In just eight days, America may well elect its first black president. Throughout the long campaign, race has been an omnipresent issue with many asking whether whites and some blacks would reject Senator Obama because of his race.

Most news outlets and commentators have discussed race in a vacuous way for fear of being called racists. In fact, if this election taught us anything about the media and race, it is that most journalists -- including white liberals -- simply lack the vocabulary to discuss and analyze race, choosing instead to engage in a cacophonous politically correct gab fest.

As the election draws to a close, one major cable news network decided to discuss race in a mephitic way, reminiscent of Amos and Andy, a situation comedy based on reinforcing stereotypes about blacks and widely popular in the United States from the 1920s through the 1950s

The show's anchor warned that the election of a President Obama would lead to a health plan with grills for all. Grills are shining metal caps worn on the teeth of blacks while they drink malt liquor from a paper bag. His guest, "Freddie Mack," attired in the traditional pimp attire complete with hat and bling, described Obama's fund raising prowess as "Big pimping." In fact, Freddie Mack went on to say, "Politicians are pimps and the electorate are their hoes." Thus, he reasoned, "bitch better have my money." In a response dripping with racism and misogyny, he reminded Americans that the financial crisis was about his sister Fannie May or Fannie may not again, utilizing the hoe moniker for black women.

The anchor also predicted that the election of a President Obama would result in a meteor striking America. His expert guest assured him of two things. The first is that such would not happen during an Obama administration and that if it did, blacks would be protected because of the complexion of our skin while whites would not. As if this was not enough, the anchor conducted an interview in which a black maid of a Jewish woman decried her years as a maid for that Jewish woman and warned that she would "clean her clock" if the old Jewish woman did not vote for Obama. Of course, besides portraying black women as violent, it also escalated the issue of Jews voting for Obama during this election. The message, it seems, is that blacks cannot convince with the facts but with fists.

The anchor also interviewed former Miss Alaska Maryline Blackburn, who beat vice-presidential candidate Sara Palin for the title. Asked whether Palin needed substance in her debate with Biden, Blackburn replied yes. No, the anchor replied, "All you need is to be in a tong and, I would vote for you."

Throughout this election, I have written prolifically about the role that race is playing. I have also said in several radio, television and print interviews that McCain and Palin created a racially charged atmosphere at some of their rallies which resulted in shouts of "kill him, off with his head, and terrorist" referring to Senator Obama. I have said that such an atmosphere is akin to the lynch mobs rallies which resulted in the gratuitous lynching of black men especially during the Jim Crow era. These rallies and the attendant racially tinged atmosphere were condemned by CNN.

Now, in a shameless show of hypocrisy, CNN -- like the slave masters who profited from racism and slavery -- has decided that there is still money in racism and found just the Negro to help it cash in. At 10 P.M. on Saturday, October, 25, 2008, CNN premiered D.L. Hughley Breaks the News.

By introducing D.L. Hughley Breaks the News, both CNN and Hughley have picked up where McCain and Palin have left off. During the course of this election, CNN has portrayed itself as having "the best political team on television." It can now portray itself has having, "the best racism team on television." This is so for at least three reasons. First, in the course of one hour, Hughley and his CNN producers managed to rearticulate the vilest stereotypes of blacks, especially the notion that at our core, black men are pimps and black women hoes.

Second, as if to give legitimacy to its racists portrayals, CNN had former White House Press Secretary Scott McClellan endorse Obama after Hughley skinned, grinned and jived while broadcasting black stereotypes worldwide. The message was this a "real" news show; even the white man came on here to make an endorsement.

Third, Hughley demonstrated that blacks still suffer from internalized racial oppression. That is, too many blacks, including Hughley have internalized the racial stereotypes of us created by whites and remind whites that it is not necessary for them to purvey them through mass media, as we will do it for ourselves.

To be sure, both the white brass at CNN and Hughley bear equal responsibility for trafficking in and profiting from racism. CNN could not have done it without him or him without them. This symbiotic, collusive relationship is responsible for keeping racism alive. The white brass at CNN laughs all the way to the bank as we continue to denigrate ourselves for the entire world to see, racists delight in the voyeuristic enjoyment of racism and America continues to call itself "post-racial."

This election has taught us that outrage over racism is too selective. Ostensibly liberal networks such as CNN get a pass as evidenced by the lack of outrage about this show and ostensibly conservative networks such as Fox get pilloried as evidenced by the fact that Bill O'Reilly was taken to task for his comments about the "normal" atmosphere at Sylvia's restaurant in Harlem. It was not too long ago that Don Imus was banned from the airwaves because of his "nappy headed hos" comment. In fact, advertisers fled in droves. I have yet to hear any advertiser flee from this show.

So America, as Election Day approaches, would the election of a black president mean that we would have addressed race or that we will continue to rearticulate it?

Dr. Christopher J. Metzler is associate dean at Georgetown University and the author of The The Construction and Rearticulation of Race in a Post-Racial America.

Originally Appeared In The Daily Voice

The Top Money and Love Book in America